You Are Here: Home » How to Play Table Tennis » Return of Serve Tactics

One of the most important tactics in table tennis is the return of service.
Discover how to improve yours and win more matches 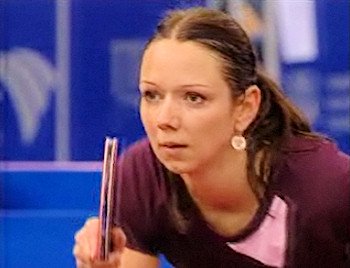 Tactics are very important in table tennis because they're used (in conjunction with your technical ability) to force your opponent to make an error or play a weak shot, which means that you'll be more likely to win the point.

And one of the most important tactics in table tennis is the return of service.

It's well known that the table tennis serve is the most important stroke in the game - because it provides the only situation in which you have total control over how and where you play the ball.

But the return of service is the second most important stroke in the game - because it provides the first opportunity for you to play the ball.

So if you're going to be successful and implement your own tactics in table tennis, you'll need to master the return of serve because if you don't develop a good return of service, you'll always lose to a player who has better serves than you. Objective of the return of service

Implementing your own tactics in table tennis start with the return of serve.

When returning serve, the objective is to put your opponent under time pressure and prevent them from playing their next stroke as they intended, so you should always try to play your shot as early as possible and vary your returns.

Before you can successfully return your opponent's serve, you first need to be able to determine (and then counteract) the spin which the server puts onto the ball.

To determine the type and quantity of spin on the ball, you'll need to watch...

By watching the logo on the ball - particularly on a short or slow service - you can determine how much spin is on the ball.

If the logo can be seen clearly, then the serve will have little or no spin, whilst if it is blurred then it usually indicates heavy (excessive) spin.

In general, when returning serve, the following principles will apply...

Limitations on return of serve

The type of shots you'll be able to play on return of serve will be dictated by the type of service you receive.

Basically, the service will either be "short" or "long".

whereas a "long" serve is one where the ball clears your end line after the first bounce ...


So let's see which shots you can play for each...

A short serve will allow you to choose from three alternatives. You can play...

whereas a long serve allows you a greater number of choices. You can play...


So how should you play these strokes...

In order to return a short service, you first need to move forward. So by positioning your right leg under the table you can get as close as possible to the ball, play your shot, and then move back out again.

If you're right-handed, your feet will need to be in the following positions... Moving forward enables you to play your shot with a bent arm and ensures that you can use both your forearm and your wrist to their maximum.

Once you've moved in close enough to return the short service, you can then choose from one of the three alternative shots...

A fast, long return is good against players who are not as strong in attack, as it will force them to play a weak attacking stroke which you can then attack yourself.

One of the most important tactics in table tennis is to play offensively.

You should always try to attack long services, but it's important that you vary the placement of your first attack as well as varying the spin and speed.

A fast, attacking return will cause your opponent to play a weak attacking stroke which you can then attack again.

As top players use the short serve more frequently than the long serve, it's important that you take the initiative when you're presented with a long service.

It's also essential to be able return the service to different places on the table.


So it's important that you...

Practice your return of serve

All the possible variations should be practised regularly until you decide on your favourite returns.

Your favourites should then be practised more, but the others should not be neglected completely as they too may be needed on occasions for extra variation.


You Are Here: Home » How to Play Table Tennis » Return of Serve Tactics