You Are Here: Home » Table Tennis Clubs » Running a Tournament

Want to organise a competition or tournament? What do you need to know about running a tournament or competition? Find out here...

If you want to organise a tournament or competition, the most widely used format is the Simple Knock-out system of play.

Players are drawn in pairs and the winners of each match continue to play in successive rounds until only one player remains unbeaten. That player is then declared the winner 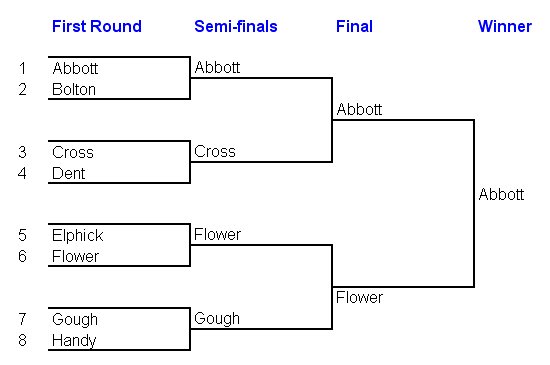 So how do we go about running a tournament or competition using this format?


Let's take a look at the processes involved...

The purpose of a draw

The purpose of having a draw when running a tournament or competition is to enable all the matches to be determined in a random manner. This stops an organiser from arranging matches in such a way that they give an advantage to particular players.

However, a completely random draw isn't usually desirable because there's a possibility that the best players could be drawn against each other in the early rounds.

Whilst this would give lower standard players a better opportunity to progress further in the tournament, organisers often need the best players to be competing in the later rounds in order to attract sponsors and spectators.

So, to avoid the best players having to play against each other in the early rounds of a tournament, a system of seeding is usually used.

Seeding players means that you assign the best players who are taking part in the competition or tournament to a position in an ordered list before the draw commences.

Their positions in the list are determined by their relative playing standard - with the best player ranked at number one.

By doing this you can then distribute these players evenly thoughout the draw so that they will not meet in the early rounds of a knock-out competition or tournament.

All other players will not be seeded and will be randomly drawn when the draw takes place.

When you're running a tournament or competition using the simple knock-out system of play, you need to have a defined number of players in the first round.

However, if there aren't enough players taking part, byes are used as substitutes for players in order to make up the required number.

This means that a player who has a bye advances to the next round without playing a match.

Byes are placed as evenly as possible throughout the draw, but they're normally placed against the seeded players (in seeding order).

This will mean that some or all of the seeded players will advance to the second round without playing a first round match.


All other players are...

All players who are not seeded will either start in the first round or, if there are too many of them, take part in a qualifying round or rounds.

These players usually make up the majority of the players taking part in the competition or tournament.


So let's now take a look at running a tournament or competition, starting with...

Depending on how many players are taking part in the the competition or tournament, the draw can be done either manually or with the aid of a computer program.

There are many different methods of conducting a draw but they should all follow these general principles.

So let's demonstrate that procedure for a competition or tournament where 64 places are available in the first round and see where the seeded players fit into the overall draw.


So after the draw has been made, the outcome is that the first round matches will be as follows:


But after the draw has been made, are you allowed to make any...

Alterations to the Draw

After the draw has been made, any alterations to the draw should be avoided if at all possible.

The only time alterations should be made is when you need to correct errors or include additional players or correct a serious imbalance in the draw if several seeded players are absent when the competition starts.

However, it's a common misconception that when several seeds are missing, the remaining seeds must be redrawn, but this is not the case, however many seeded players are absent.

It is entirely at the organisers discretion whether a partial or complete re-draw is made but it's best not to make any changes, no matter how many players are absent and whatever their ranking.

Where many players are missing, perhaps owing to bad weather, it may be feasible to make a complete re-draw, but this is a matter for the organiser's judgment.

However, no changes should be made to the draw after the competition has started.

Running a tournament or competition successfully involves scheduling matches so that you make the best use of the tables and the time available, both for the benefit of the players and the spectators.

Additionally, the more efficient the scheduling, the greater the number of players that can take part in the tournament, and this may benefit the organiser by increasing the income from entry fees.

Scheduling is all about dividing the time available into periods to which matches can be allocated, so the first thing you need to do is to decide how much time to allow for matches to be played.

The time required to complete a match will vary from tournament to tournament, but a good average time to allow for a best-of-5 games match is 25 minutes and 40 minutes for a best of-7 games match. However, it's very unlikely that a tournament will run precisely to time.

Players who've just finished a match shouldn't be required to play another match immediately afterwards, but equally they shouldn't have to wait several hours between successive matches. However, it can be assumed that a player who enters a number of different events is willing to accept the risk of having to play a number of matches in a limited time.

The allocation of matches to tables should take account of the interests of both players and spectators. For example, it's better for a player not to play successive matches on the same table in order to avoid any suggestion of an unfair advantage through familiarity with the playing conditions.

Also, matches which are likely to be very entertaining or to have a special interest should be played on tables where they can be easily watched, although care should be taken when concentrating spectators around particular tables to ensure that they don't cause access problems.

It's also advisable to allow for delays and over-running by keeping a few tables free at particular times. These free tables can then be utilised if necessary.


You'll also need to consider the...

Depending on the level of your competition or tournament, you may or may not have qualified umpires controlling matches.

In lower level tournaments it's often the player who has lost their last match who acts as umpire for the next match on that table, but it's obviously much better if qualified umpires are available.

If qualified umpires are available, their duties should be scheduled as carefully as matches, especially in the early stages when most, if not all, of the tables are likely to be in use.

Ideally, the number of umpires should be 4 times the number of match tables to allow reasonable breaks and some spare capacity. So for example, in a competition using 12 tables, there should be 12 x 4 = 48 umpires.

Umpires can then be arranged into teams, with some teams controlling matches, some teams in reserve and other teams taking a short break.


The organiser must also ensure that they keep...

Control of the tournament

When running a tournament or competition it's vitally important that someone remains in charge and keeps it running smoothly and, as far as possible, on time.

The organiser must be aware of the progress of play, anticipate any problems and make necessary adjustments before delays become serious. However, care should be taken to avoid unnecessary changes as they can cause confusion for players, match officials and spectators.

If the schedule of play has been carefully planned there should be sufficient free tables available to use when matches over-run their time slot and stop successive matches starting on time on a particular table.

Problems are most likely to occur at the beginning and end of the tournament, either because players arrive late or because the same players are involved in the latter stages of several events.

The important point to remember is that, as organiser you'll often be faced with a situation in which there is more than one justifiable course of action, and different individuals may make different choices.


You Are Here: Home » Table Tennis Clubs » Running a Tournament