How To Choose Your Table Tennis Balls

Top tips to help you choose your ideal table tennis balls.
Part one - Are all TT balls the same? Table tennis balls are available in many different varieties so it's important that you know what to look for before choosing which ones you should buy.

Table tennis has been a passion of mine since 1971 and I'd love to share my knowledge with you. So let's take a look at the various types of balls that are available and also see what the rules say about them.

We'll also take a quick look at the two most recent major changes made to the ball which affected the size and material used to make them.

Then in part two we'll take a look at the list of authorised balls and see what criteria they need to meet in order to get onto the approved list.


But first, let's begin with a quick history lesson...

The search for the perfect table tennis ball

Ever since the game was first invented in the late 1800s, the search for the perfect table tennis ball has continued unabated.

Early versions of the game were unsuccessful because they were unable to find a suitable ball, and it was only when the celluloid ball was first introduced in the early 1900s that the game became popular.

But ever since then, the search has continued for a better ball, and different manufacturers have experimented with different materials in order to try and improve its playing characteristics.


But there were relatively...

The original 1926 Laws (rules) relating to the ball remained relatively unchanged until 2000, although the specified colour of the ball changed several times during that period.

In the original Laws it stated that the ball must be "pale in colour" but in 1947 this was changed to "white and not brightly reflecting".

The addition of a yellow/orange ball colour was solely to make the ball more visible in certain surroundings.

Since the year 2000, there have been two major changes to the table tennis ball.


So let's take a quick look at the two most recent...

There have been two major changes to the table tennis ball more recently.

Following trials in the late 1990s, the rules were amended with effect from 1 October 2000 and the size of the ball was changed from 38mm to 40mm.

The International Table Tennis Federation (ITTF) took the view that:

The new, larger balls were also endorsed with "40" or "40mm" to distinguish them from the 38mm balls.

The second of the two most recent major changes to the table tennis ball took place in 2014...

2. From Celluloid to Plastic balls

In 2011 the ITTF decided to promote plastic balls rather than celluloid balls.

This was a major change and one which caused a great deal of anxiety in the lower ranks of the sport.

The ITTF said that the primary issue was with the manufacturing process used to make celluloid balls.

The raw materials are considered hazardous to health and many countries no longer allow manufacturers to use them, so the ITTF was hoping that by changing to balls made of plastic, that they would avoid any future shortage of balls (due to shortages of the raw materials required to make celluloid balls).

So in 2012 the ITTF agreed that, with effect from 1 July 2014, all ITTF events would only use table tennis balls made from plastic.

However, the ITTF also said in 2012 that celluloid balls will continue to be "legal" for all other events for at least two more years, and possibly longer.

The new plastic balls are also known as "Poly" balls.

Finally, at the ITTF Annual General Meeting in 2022, it was agreed that with effect from 1 January 2023 the official rules would be amended and reference to celluloid balls was deleted.

The official rules therefore now state that table tennis balls shall be made of plastic material.


So what do the rules now say about the...

The official rules of table tennis state that the ball shall be:


So, are all balls the same?

Table tennis balls are not all the same. There are many different types available and each one will be suitable for a different purpose. Firstly there are the fun/novelty balls.

These are available in lots of different colours and sizes and are particularly suitable for children and for fun, recreational play.

They can vary from very soft to very hard, and can usually be bought in packs of all one size or in mixed packs.

However, unless they are white or orange 40mm diameter balls weighing 2.7g, they will not be legal and cannot be used in competitive play. Next, there are balls known as practice or training balls.

These are generally a softer ball and are best suited for a young child or beginner who is practising or training.

These balls are not usually very durable and are susceptible to breaking when hit hard.

However, if they're white or orange 40mm diameter balls weighing 2.7g they will be legal, although I wouldn't recommend them. 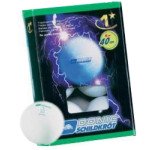 Then there are balls which are classified as one star.

These are suitable for use at places such as schools and youth clubs.

Like the practice balls, these are also generally a softer ball which are susceptible to breaking when hit hard, but will be legal if they're white or orange 40mm diameter balls weighing 2.7g. 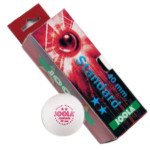 Then there are two star balls.

These are generally suitable for use by improvers and can also be used in a robot, or for multi-ball practice.

They will not be of the highest quality, but are a good enough substitute for three star balls in a non-match play situation.

They'll generally be balls which failed to meet the higher standard required for three star balls, but will be legal if they're white or orange 40mm diameter balls weighing 2.7g.

And finally, there are three star balls.

These are the highest quality balls available and are the only type which are authorised by the International Table Tennis Federation.

If you're serious about playing table tennis, these are what you need. These balls meet all the requirements of the stringent tests set by the ITTF and are the most durable of all.

The rules of table tennis now state that balls shall only be made of plastic material.

The ITTF list of approved balls contains many different makes, but my personal favourite is the three star Xushaofa plastic seamless ball.

The International Table Tennis Federation produce a list of authorised 40mm table tennis balls, but before any ball can be placed on the authorised list, it must go through a rigourous testing programme.

In part two we'll take a look at the list of authorised balls and see what criteria they need to meet in order to get onto the approved list.