The World Team Championships 2022 took place in Chengdu, China from 30 September to 9 October 2022. Get all the details here

The ITTF 2022 World Team Table Tennis Championships were hosted and organized by the Chinese Table Tennis Association under the auspices and authority of the International Table Tennis Federation.

The Championships were held from Friday 30 September to Sunday 9 October 2022.


But first, did you know that the World Table Tennis Championships are now...

So 2022 was the year for the team events to be contested, and Chengdu, China staged the event from 30 September to 9 October 2022. However, the original Corbillon Cup disappeared just after World War Two, so the German Table Tennis Federation paid for an exact replica in 1949 (the German Women's team won the Cup in the 1939 World Championships - the last time it was played before the outbreak of World War Two).

Equipment being used in 2022

The following equipment was used at the 2022 World Team Championships... 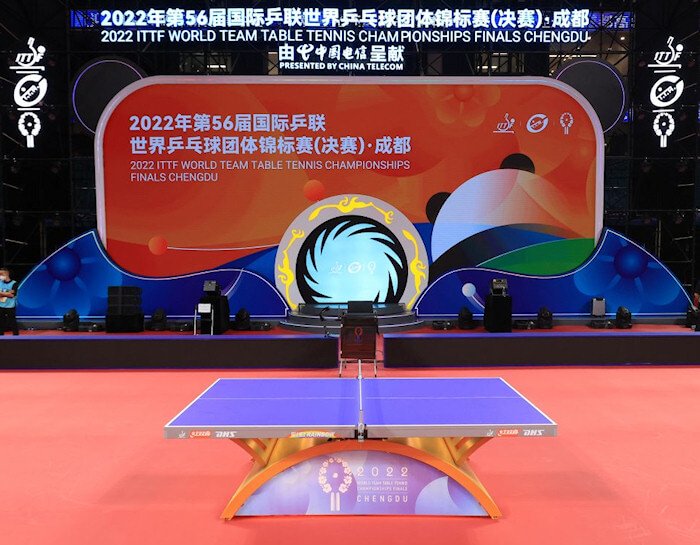 Format of the 2022 World Team Championships

Due to the worldwide Coronavirus Pandemic, the Team Championships for 2022 had a revised qualification and playing system.

33 Teams qualified from Continental competitions and the quota allocation was: 4 for Africa, 10 for Asia, 11 for Europe, 6 for PANAM, and 2 for Oceania.

The host nation was also guaranteed a place.

The remaining six places were reallocated as follows - Europe (1), Asia (1), PANAM (1), Africa (1), Oceania (1) and the highest ranked not-yet qualified team from the World Team Ranking as at January 2022.

However, not all teams confirmed their entries and therefore fewer teams actually took part in the competition.

The 2022 World Team Championships were due to be played in a single "Division" with 40 teams in 8 groups of 5 teams.

Each group of 5 teams would play a complete round robin competition (4 matches per team).

Following the completion of the round robin in each group, a single knock-out competition would played.

The winners of each group (8 teams) would be drawn into the first 8 seeded positions of the knockout competition.

The teams finishing 2nd in each group would then be drawn randomly against a group winner, with the exception that teams having played against each other in the group stage shall not meet again in the first round of the knockout competition.

However, not all teams confirmed their entries and therefore fewer teams actually took part in the competition.

Teams who qualified to take part in 2022

**no TTFR or Belarusian players and officials are currently allowed in ITTF events, in line with the recommendations formulated by the IOC Executive Board.

The 32 teams who confirmed their entries were:

**no TTFR or Belarusian players and officials are currently allowed in ITTF events, in line with the recommendations formulated by the IOC Executive Board.

The 28 teams who confirmed their entries were: 
And you can get all the information here for the...